The Lifecycle Manager introduced with vSphere 7.0 can create desired configurations and then apply them to hosts (of a cluster). For this purpose, like the vSphere Update Manager (VUM), it uses so-called baselines, which may also contain OEM components. The vLCM can correct deviations from this.

The vSphere Liefecycle Manager can be found in the main menu of the vSphere Client. From version 7 only the HTML5 version is supported, the flash client is a thing of the past. 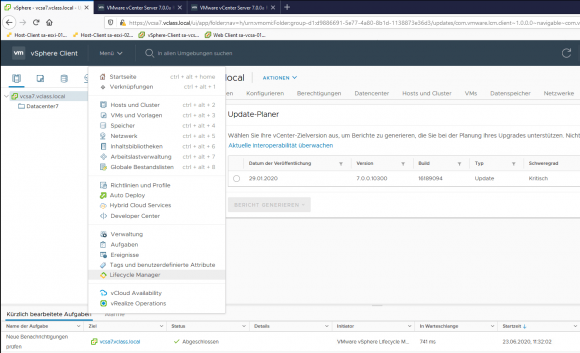 Here you click on Updates and filters for example in the column ID after 700 to get the results after patching for ESXi 7.0.0. You can also choose the list according to version, Releases or category enclose.

If vCenter is connected to other vCenter systems via a common single sign-on domain, the settings can be configured separately for each instance of vSphere Lifecycle Manager. The changes apply only to them and not to the other instances in the group.

In a similar way, vLCM can be used to check conformity and status. It is therefore possible to correct only the inventory objects that are managed by the vCenter server on which the respective vLCM instance is running.

Admins can also use individual or groups of baselines to check and update the ESXi hosts in their environment.

In previous versions of vSphere, baselines and baseline groups were the only option to provide updates and upgrades for hosts through Update Manager (VUM).

In vSphere 7, too, a baseline is a grouping of several bulletins. Users can attach them to an ESXi host to check the host’s compliance with the associated baseline.

As of vSphere 7, the official VMware online depot hosts not only VMware but also certified partner content, there is a larger number of OEM bulletins in the vSphere Lifecycle Manager. You will also dive into the wizards Create baseline and Edit baseline on.

Some of these bulletins may have dependencies that customers must incorporate into their baselines for the correction of these baselines to be successful. As a best practice, VMware recommends that users always consult the KB article for a single bulletin before baselining it. This contains information about the special features of bulletin provision and the required dependencies.

In vSphere 7, VMware has also made some changes to the way that VMware content is packaged. In patch and update versions, the wizards for creating and editing baselines may therefore display additional bulletins on the patch selection page.

These bulletins normally belong to the category Enhancement or BugFix. If you include them in a baseline, you may also have to integrate ESXi basic bulletins. To ensure the successful application of VMware patches and updates, you should always include the appropriate rollup bulletin in your baselines.

Starting with vSphere 7, users can manage the software and firmware lifecycle of a cluster’s ESXi hosts with a single image. vLCM images are a new feature that provides a simplified and unified workflow for patching and updating ESXi hosts.

Users can also use such images for bootstrapping purposes and firmware updates. Each vLCM image consists of the following elements:

Please note that from vSphere 7 the component the smallest unit is with vLCM software from VMware and third-party installed on ESXi hosts.

Components have the following properties:

The following illustration shows the vSphere Lifecycle Manager home view, this is the tab Image depot.

It shows details about downloaded ESXi items such as ESXi version, manufacturer addons and Components.

If you select a downloaded file, the details are displayed on the right: For a ESXi version are the version name, build number, category, description and the list of components that make up the base image.

You dial one Manufacturer add-on, then the details include the add-on name, version, manufacturer name, release date, category, and list of added or removed components.

At a component contain the details of the component name, version, publisher, release date, category, severity, and content (VIBs).

Before you update ESXi with Lifecycle Manager, version 7 must be running on all vCenter systems. The VMware Interoperability Matrix ensures that ESXi 7 is compatible with other VMware products used. Then you switch to Imported ISO files tab and click there Import ISO. 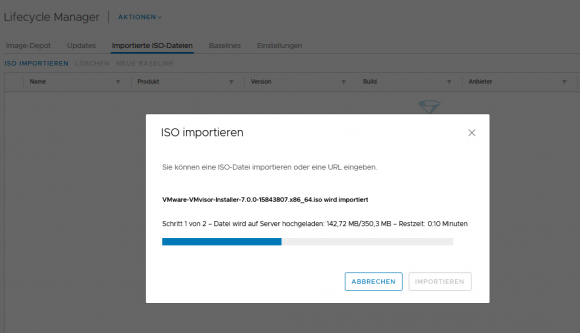 Now it is possible in the menu Baseline To create a new upgrade baseline for the ESXi upgrade: 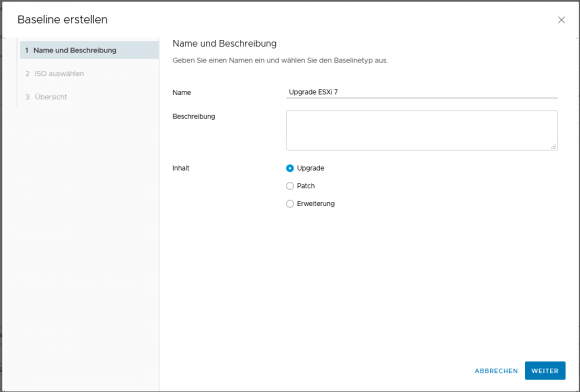 Here you select the imported ISO under “Select ISO”: 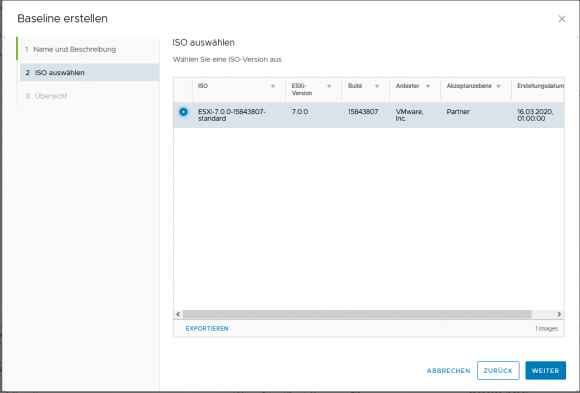